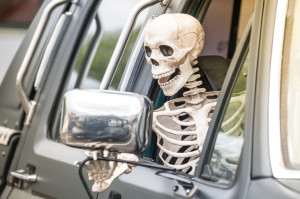 Halloween is right around the corner, and that means it’s time to celebrate by watching a spooky movie. There are plenty of seasonal classics, such as “Hocus Pocus” and “The Nightmare Before Christmas,” but these films focus on traditional scares like ghosts, skeletons and witches.

Wouldn’t it be nice if there were scary movies that had to do with trucking? Believe it or not, there are. Keep reading to learn more about three of our favorites.

1.) Maximum Overdrive. “Maximum Overdrive” was released in 1986. It stars Emilio Estevez and was directed by the master of horror himself, Stephen King. The movie tells the story of a severe radiation storm caused by a passing comet. This seemingly benign event causes all types of machinery to come alive and seek revenge. Specifically, the movie focuses on a group of people stranded at a truck stop. You can watch a trailer by clicking here.

2.) Duel. “Duel” is a 1971 film starring Dennis Weaver. It tells the story of David, an electronics salesman on a cross-country trip. At the beginning of the movie, David encounters an oil tanker driving erratically. What David thinks is a one-time encounter ultimately turns into a deadly game. No matter what David does to try and escape, the seemingly possessed tanker is always right behind. Though it might sound cheesy, “Duel” is worth a watch. It’s directed by a young Steven Spielberg. You can watch the trailer by clicking here.

3.) Joy Ride. “Joy Ride” is probably the most well-known movie on our list. Released in 2001, it stars Paul Walker as college student Lewis Thomas. Lewis and his girlfriend set off on a road trip, but get sidetracked after a special request from Lewis’ older brother. While making the detour, Lewis decides to play a prank on a trucker using his CB radio. The trucker, a mysterious figure known as Rusty Nail, doesn’t take kindly to the joke. Terror ensues! You can watch the trailer by clicking here.

What’s your favorite trucking-related horror film? If it didn’t make our list, visit our Facebook page and let us know.