HOW IT ALL BEGAN

Mark Droubay was raised on dairy farms in both Erda and Delta Utah. On the farm they had tractors and trucks and he loved them both, he figured he would either be a farmer or a truck driver when he grew up. Learning to drive semi-trucks on the farm, at the age of 22 he purchased his very first truck in 1984, it was a 1979 Freightliner cab-over.

In Mark’s words, “I figured that someone would always be willing to pay me to haul something with my truck.” And that is exactly what he did, hauling mainly gravel and hay. In 1987 he began hauling for Steer Tank Lines and they asked him to take a load of asphalt oil. From that day forward he almost exclusively hauled asphalt oil to hot plants in Salt Lake City.

In 1990, Steer Tank Lines decided to exit the asphalt industry. Mark went to the hot plants and asked if they would allow him to be their direct asphalt carrier and they agreed. He worked tirelessly from that point on to make sure his customers had all their liquid asphalt and emulsion needs covered. It was also in 1990 that he traded his 1979 Freightliner in for a 1987 Kenworth T600. In 1992 he was able to purchase a second truck to help keep up with the growing construction industry in Utah. As the asphalt construction in Utah grew so did his company.

The company continued to grow until they were largest asphalt carrier in the state of Utah. Over that time Mark diversified his company to make sure he could always provide work for his employees when construction wasn’t in season. Now Double D has 38+ trucks, 80+ trailers, and 40+ employees.

Double D specializes in hauling hot liquid asphalt and emulsions and also hauls: crude oil, flatbed, dry van, refrigerated freight, milk, and heavy equipment. You can learn more about what we do by checking out our SERVICES. 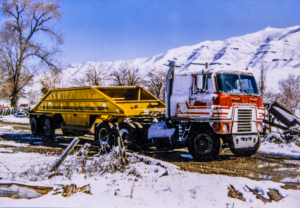 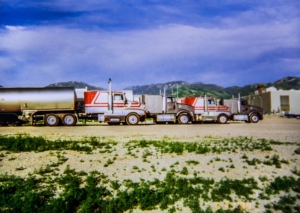 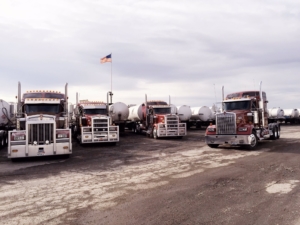 Drivers are the life-blood of our company. All of Double D management was and still is a truck driver today. We are so excited to get to work with you. Please click the red button below to start the process of working at Double D!

HOW WE HAVE GROWN