Which are your favorite tunes for the open road? 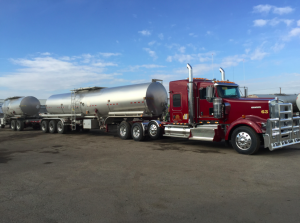 America is home to more than 3.5 million truckers, which means there are a lot of stories to tell. And what better way to tell a story than through a song? Ever since the inception and development of Route 66, singers and songwriters have dedicated their ballads to the hard-working men and women of the trucking profession.

There are dozens of great songs to choose from, but we thought it would be fun to select a handful of our favorites.

18 Wheels and a Dozen Roses — Kathy Mattea. A great tune about a truck driver making his final work trip before retirement. He’s reflecting fondly on his truck driving career and looking forward to hitting the road once again, this time with his wife in a Winnebago.

C.W. McCall — Convoy. This song is probably the world’s most famous trucking song. It tells the story of a group of truck drivers transporting everything from hogs to logs and refrigerated goods across the United States. When the song hit the charts in 1975, it reached the number one spot on both the country and pop charts. This one has lasting power, too. Rolling Stone Magazine gave it the #98 spot on its list of the “100 Greatest Country Songs of All Time.”

Jim Nesbitt — I Ain’t Never Been Passed. If you’ve been a trucker for any time at all, you’ve been passed by other vehicles. There’s nothing wrong with that. If anything, it means you’re doing your job the safe way. Nonetheless, it’s fun to hear Jim Nesbitt sing about his skills as a lead-footed truck driver. Add in the twang of steel guitar and a list of progressively questionable brags, and you’ve got a classic.

Red Simpson — Born To Be A Trucker. Red Simpson’s “Born to Be A Trucker,” tells the story of a hardworking driver who can’t quit his love of the road, even when his sweetheart begs him to do so. Lyrics include:

Simple, yet poignant. Plus, if you listen to this song once, it’s sure to get stuck in your head.

Roll On (Eighteen Wheeler) — Alabama. This catchy tune was Alabama’s 12th number one hit in a row.

What’s your favorite trucking song? If it didn’t make this list, visit our Facebook page and let us know.